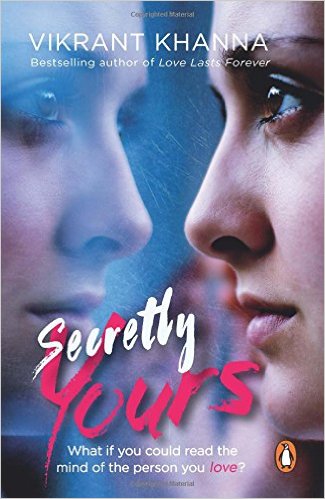 Vikrant Khanna is a captain in the merchant navy. His other books include Love Lasts Forever and When Life Tricked me.

The protagonist is a 17 year old Sahil, who has lost his parents and blames himself for that. He stays with his grandmother, a sibling and his cousin. He is one person who has everything and yet nothing. The book portays that he loves music and less of studies.

This teenager’a life is unlike most of the teenagers in the nation. He takes to self-harm,drinking and smoking.

He has little interest in life until he meets the enigmatic, too positive and mysterious Anya to whom he had to teach guitar.

Sahil is heartbroken and in a turn of events he meets with an accident, that kills his grandmother and lands him in the hospital with a coma. Them he recovers gets Anya back and mind reads.

Sahil has a strained relationship with everyone around him. The accident brings him close to people around him but he is still obsessed with Anya. Highly over thinking for a seventeen-year-old.

He discovers Anya and her gang’s secret and has a Twilight moment in their house like how Bella had in Edward ‘s.

If you are intrigued and what to know what the secret is, pick up the book and no, she is not a vampire.

The book is extremely dramatic and portrays things that a teen actually doesn’t do. The book is like a script written for a Bollywood movie with a Hollywood twist. Like a blend of Twilight book and a high on drama Bollywood movie. Fiction at times are too good to believe but the most content here is unrealistic and the author leaves one hanging in the air on many aspects without giving  proper closure.

Unrealistic aspects of the book put me off. Where one side problems and what a teenager thinks is dealt , the other side the problems and lifestyle is highly magnified in a wrong way. An elaborate discussion of unnecessary things is an off again. I expected the thriller part to be exciting but as the book progressed my interests went down flat. Definitely not a single sitting book unless you are going to skip a lot of parts.

The book is a okay one time read. Pick it at your own risk. If you don’t mind defying reality and a little truth, you can go ahead.

I haven’t read the other books of the author but this book was disappointing and could have been better.

This review is a part of the biggest Book Review Program for Indian Bloggers. Participate now to get free books.