And One Sunday Richa Happened!

Chennai was my home for eight months.  Life was monotonous back then. Home to work and then back again. The  occasional visit to the mall for a movie or shopping and cousins day out kept me going. My blog kept me sane while, all I wanted was to break down, cry and lock myself into a dark room.

I believe people have that power to change people. Changes happened real quick.  All the difficulties my transfer process was facing reduced, my blog and ebook appreciated,I made wonderful connection with fellow bloggers and Blogchatter came to Chennai.

Because I was away from home, long weekends were home time. Never did I break the ritual nor did my parents let me to. Richa  was an exception to that rule. I boarded on to the Saturday night train from Bangalore and then reached Chennai late on a Sunday morning. Late mornings are bad mornings for me. The scorching heat, lack of sleep and time were plotting to thwart my plans of reaching the venue. The venue was an odd place like the 12 Grimmauld Place in Harry Potter and The order of Phoenix. There was a 11 and there was 13 but I don’t know where 12 was. Neither did any of the locals. The google maps showed the right place, but I was too paranoid to enter, the place. I did though, because sometimes map don’t lie.

Phew, finally I did reach the place to meet the sorceress aka the owner  of the  Philosopher’s stone. The meeting followed with a hug and she was back to action. Checking up on the number of participants, dealing with (whom I consider crazy) people gracefully and so many more things more together. She is the multi-tasking queen I must say. A not so garam but tasty chai, few selfies and fabulous session followed. The way she speaks about Blogchatter, social media and blogging, I can never, so this post will have nothing about the gyaan I received. I am very possessive about the time I got to spend there.

After the Blogchatter class which I  call as the much required gyaan I needed, one of the best things that happened to me in Chennai. After 3PM was mine and Richa’s our time. We discussed so many things, blogs, people, social media, Blogchatter and what happens in Chennai remains in Chennai.  I always admire people who follow their passion and Richa is a perfect example. For the starters, I appreciate people more often but idolize them very rarely. For a complete stranger I fought with my parents to get back to the city that I wanted to get out of. Well, she wasn’t a stranger exactly but yet a less known person.

The Sunday we met was one of the very few positive days I had in ten months. Her passion lit up the cafe we were sitting in, that day I learnt from her, the determination to pursue your passion will make the entire universe conspire. She is that person who gives more and someone way more than she portrays herself to be. She is a fire .  We had a very meaningful conversation, a connect that I find with very few people. We had to part because she was already running late to catch the heavy on pocket flight.

The city Chennai shook me up and uprooted my roots which were once very  firm . Meeting Richa, changed so many things in me, I became the old determined, positive me. The real me.

Ending this narrative that with two of my favorite quotes :

“Ultimately the bond of all companionship, whether in marriage or in friendship, is conversation.”
– Oscar Wilde

And this from The Sisterhood of Traveling Pants:

“I always interpret coincidences as little clues to our destiny” 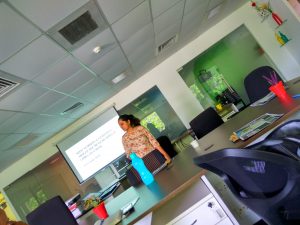 Linking this post to Day 10 of #HalfMarathon by Blogchatter