When a woman walks across, be it in a bus stop or in the workplace men ogle and women gawk at you and then begins the judging. Appearances have to be judged, else they would be stirring in their graves with regret. Oh, men will be men, but women, their judgements and gossips are irksome!
It is intimidating and uncomfortable for us when you men look at us like you are undressing us with your eyes when we wear an outfit that rightly fits us. I have experienced this at the workplace as well. It is just too embarrassing to accept and when it is a senior doing that, it makes it difficult to speak up. I have learnt it from others, laugh and taunt, people don’t feel the sting, and if they get the message they can’t protest or shoot back because it would make them look bad, and people don’t like to look bad. I used this tactic once and I am going to use it again, for I am sure I would need it always.
My mother is too afraid, and currently staying in a very orthodox and traditional city like Chennai, she just wouldn’t let me keep my right fitted clothes in my bag, she felt it was revealing, it was infuriating! I wear what I like to and what I am comfortable in. She feels it would be embarrassing if someone ogled at me or touched me in the inappropriate place, thinking I was available.In a way, she was being judgemental but she had a  point, but what she did not know was, people would stare and pass their judgement anyway.  People tend to be stereotypical when it comes to women and their appearance.
Not just experience, but even statistics say the same. Take a look at some of the startling figures that the Nihar Naturals #IAmCapable survey conducted by Nielsen India reveals:
a. 69% of men agree that their judgement of women is based on their looks.
b. 64% of women agree that the judgments passed on them have affected their ability to reach their true potential.
c. 70%of women agree that majority of judgments on women are from family members or friends rather than strangers.
d. 72% of women agree that working women face more judgments on their looks or their clothes than housewives. 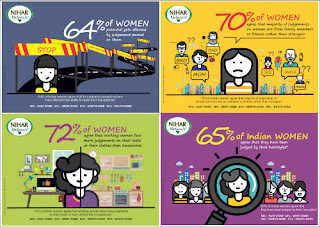 You dress up nicely and go out with a guy friend, people are judgemental.I had once been out with my cousin to help him with his shopping, I was feeling good, so I put on a perfectly fitted top and jeans. As I was waiting out the trial room, for my brother to come out, a woman was waiting for her husband, when my brother came out and as we were discussing whether to buy the dress or not, the woman pointed  out at us said to her husband,” Look at the couple, their relationship shall not sustain, I mean he is so tall and fair, and she short and dusky, I don’t know how they fell in love the first place. Couple these days!”
What she did not know that we were not a couple and the language she used so that we wouldn’t know what she was speaking about, was a language I knew very well. How judgemental of her, just by our appearance, I have chosen to ignore such people and wear whatever I like and be the person I am. I did not react in haste like she did, setting us apart. I have been listening to such judgemental comments for years now, and I choose to be ignorant about the fact that they shared their opinion when it becomes too much to bear, all I tell them is, neither am I  modelling course nor on a husband hunting spree to make myself appear able to all those who don’t matter. It worked, and I am glad it did.
I wear kurtas only, then people call me homely. I seriously don’t know what that means. I love ethnic, I am comfortable. I wear western too, but the compliment was insulting. I was judged to be compromising and easy going. Yes, I am easy going and don’t fuss much. But I have my own spells, I am not calm and “homely” always, even though I am wearing my ethnic wear. It is in the heart that matters and not in the appearance.
To all the judgemental people out there, it is important for women and men to be beautiful and not just pretty. It is the good nature and benevolence of a person that counts and is of significance than the good looks.
“I’m breaking stereotypes based on appearance by sharing my experience for the #IAmCapable activity at BlogAdda in association with Nihar Naturals.” 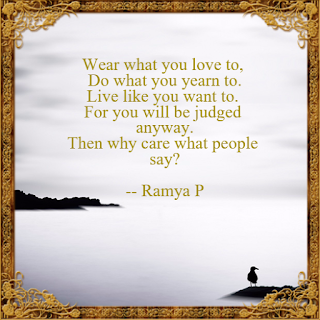