Courage to me is eating my comfort food, a big bar of chocolate when times are bad and not feel bad about it. A lot of courage it takes especially when you are on the diet and when you know this bar of chocolate would mean extra workout which you don’t have time for. A lot of courage it needs to pick up that bar, ain’t it?
On, a serious note , being courageous is a character that I think most of us must possess today. Especially we women, need to be courageous enough to stand against the wrong both personally and professionally. It needs immense courage to come out of comfort zone and take risks. Courage is a lot of things.
Courage not only means standing up against wrong doing, of course it takes courage to do that. I am the person who tries something new and will not give up until I finish it my way. Well, doing things is a difficult task. But being the first one to do it needs courage.
You need the courage to stand up and express your opinions, else it will get crushed somewhere between what others think and the norms of the society.
Had the father of our freedom fighters not shown courage, we wouldn’t have been independent and I probably wouldn’t be able to write this.
Courage is backed up by so many examples. Courage sees no caste,creed,gender,religion or race, it just creeps in and make people take action over the fear that has gripped them and makes them famous.
Courage is that magic wand that can make one’s dreams come true. Make it a reality.
And this quote sums things up.
” It takes a great deal of bravery to stand up to your enemies, but just as much to stand up to our friends.”
– J.K. Rowling 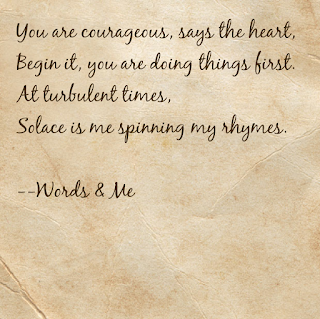 Also linking it to day 17 of UBC