Years have come by and gone.  Resolutions made,some fulfilled in a year, some over time but one resolution over years continue to remain every year.

The resolution was to say no whenever it was required instead of saying he’s to everything and being bossed upon.

Well, difficult it is,  isn’t it?  How do I tell no to a co-worker, who may return the favour tomorrow, although i would be delaying my lunch and spoiling my health. How do i tell no to the non sense of a cousin when she loves me as much as I do although he or she maybe crossing the line I have drawn.

But this year, I have decided, no matter how difficult, I am going to say No to things and non sense of people instead of being bossed upon. Its always safe a d less heart breaking to say  no initially than saying it after all the limits have been crossed.
I am an adult yet sometimes have to live the life dictated by someone younger to me or elder or peer. My mistake completely, for I have ways been the elder,  the elder sister  the elder daughter,have always been expected to adjust with the non sense and stupidity of the younger ones, although you k ow sometimes the younger ones are wrong.  But I no longer want to, or accept to do it. I want a life in my terms, not dictated and shared.

Do you have some thoughts on how I could say No and handle such situations.

Also linking it to Day 1 of Ultimate Blog Challenge! 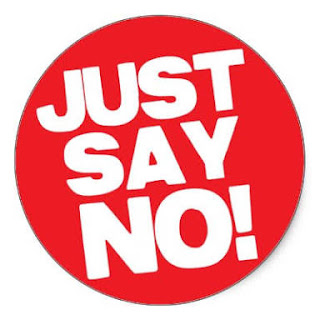