He loved her hard,
His eyes all starred.
She loved him back,
Like she had that knack.

He affected her in a way none had before,
Like he has opened her second door.
She eased away his troubled up past,
She had a beautiful spell cast. 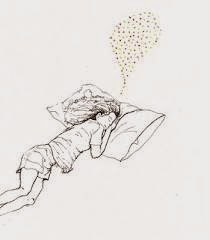 He dreamed to pursue his career.
But she made all the things queer.
She dreamed to be his forever,
Crossing every hurdle together.

They married and continued to love,
Loyal to the stars above.
He pursued his career with army,
While her life remained stormy.
She was told  she had lost him in the battle,
While back in the crib,the baby’s  toy did not rattle.

His dead body still seemed to have its charm,
The wife  jolted by the shrill alarm.
Her husband peacefully sleeping,
She wondered what he was dreaming,

This post is written for  Poetry Jam.
Prompt: Dream